More than half want to build new reactors if needed

Every fall Novus performs a survey of the public opinion on nuclear power in Sweden. The surveys are ordered by Analysgruppen, a group of experts and researchers from the energy sector, industry and academia.

– There have been many events related to energy and climate during recent months that may affect the public opinion. The fall survey was performed in November 2021 right before the drastic increase in electricity rates in Sweden, and there were also many other issues related to nuclear power discussed in news media and the political debate. Therefore we repeated a question from the survey in February 2022 in order to see if recent events would have any effect towards more positive or negative attitudes regarding nuclear power. The survey in February coincided with the Russian attack on Ukraine, with new events related to energy and nuclear power, so we repeated the survey again in order to see if there would be further effects.

According to the new survey, which was performed in the end of March, 56 percent of the respondents want to continue to use nuclear power, and if needed also build new reactors. The result is a statistically significant increase compared with 52 percent in February and 46 percent in November. 28 percent want to continue to use the existing reactors, but not build new ones, and 10 percent want to close reactors through political decisions. Compared with earlier surveys there are more respondents now that have a definite opinion on nuclear power, only 6 percent are hesitant or do not know what to answer.

– The support for the use of nuclear power is higher than ever, says Mattias Lantz, researcher at Uppsala university and chairman of Analysgruppen. 84 percent want to use the existing reactors and more than half may consider the construction of new reactors. The surveys do not tell which individual factors that affect the opinion, but it is clear that more people see nuclear power as an important tool to counter several of today’s challenges. We also asked a question regarding if nuclear power can be a tool for reaching the climate goals, and 67 percent think that it can, an increase from 57 percent in May 2021. But 18 percent do not see nuclear power as a tool that can contribute to the climate goals.

Earlier the youngest age group, 18-29 years, tended to be much more negative towards nuclear power than the older groups, but during the last few years this has changed and there is no large difference between different age groups today. In the new survey 51 percent of the young may consider new reactors being built while 27 percent want to use the existing reactors but not build new ones. 14 percent of the young want to close nuclear power plants through political decisions.

In the survey in November 2021 there were also other questions asked, a few of the results are reported here while the rest are given in reports available in Swedish on the web page analys.se. In a question proposing the replacement, if needed, of old reactors with new ones on the same sites 51 percent responded in favour while 24 percent were against the proposal, 25 percent were undecided.

A majority of the respondents feel safe with nuclear power in Sweden. Among the proportion that express concerns the main concern is the risk for accidents, but there is also an increased concern related to the handling of spent nuclear fuel.

– Considering that the issue of a geological repository has been intensively debated it is not surprising that many respondents mentioned it, says Mattias Lantz. In January 2022 the Government made a decision to allow a geological repository to be pursued, so it will be interesting to see if that changes the responses the next time we ask the same question.

Analysgruppen has followed the opinion about nuclear power in Sweden since 1997. The surveys are performed through web interviews in a randomly recruited panel by Novus. Since 2006 the questions and answers in the surveys have the same wordings. Each individual survey has about 1000 respondents in the age span 18-79 years. The time periods for the surveys reported here were 27 October – 2 November 2021, 24 February – 2 March 2022 and 24-31 March 2022. The response rates were 56-57 percent. All reports are available in Swedish on the web page of Analysgruppen: analys.se 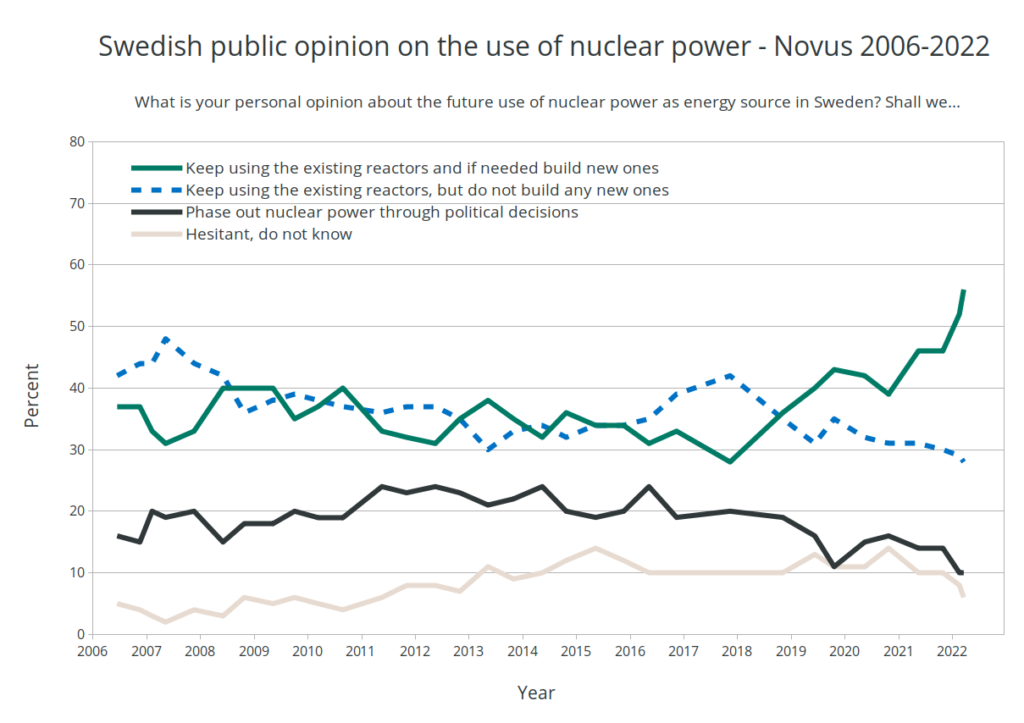 This press release is available as pdf here. For requests of further information about the opinion polls in English, please contact us. The results from the latest opinion poll available in Swedish are found on this link. There is also an archive with the results from older polls.